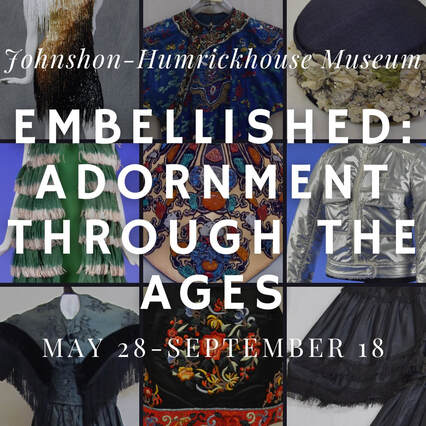 Lace, beads, embroidery, buttons… There are many things that adorn our everyday clothing choices that make them stand out from simple fabrics, and the fashion of previous centuries was no different! Join us at the Johnson-Humrickhouse Museum this summer to explore a history of embellishments from head to toe across the world through Embellished: Adornment Through the Ages.
This show features several designer pieces, including designer Bob Mackie, an American designer best known for styling many icons such as Carol Burnett, Elton John, Lucille Ball, and Cher, just to name a few; Givenchy, the French fashion house known for creating the “little black dress” worn by Audrey Hepburn in Breakfast at Tiffany’s; Todd Oldham, a New York based designer whose bright pieces were often worn by Fran Drescher in The Nanny; and André Courrèges, the “Space Age Designer,” who is credited with creating the mini-skirt and the staples of 1960s fashion. Pieces from JHM’s own collection spanning centuries and locations from China to our own backyard will emblazon upon fabric the history of fashion adornment, and how it’s not so different from the way we embellish today.